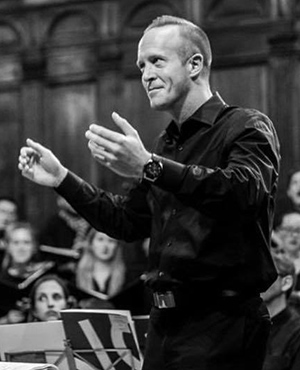 Dr. Andrew Kreckmann was appointed the Director of Choral Activities at Sacramento State in Fall 2018. He directs both of Sac State's student choirs and oversees the graduate choral conducting program. For the past three years, Dr. Kreckmann has served as DCA at Henderson State University in Arkadelphia, Arkansas. There, he conducted several choirs, taught choral methods, basic conducting, advanced choral conducting, and oversaw the choral music education student interns. Prior to his appointment at HSU, Dr. Kreckmann served as Interim Director of Choral Studies and oversaw the choral conducting graduate program at Wayne State University in Detroit, MI. He also served as Director of Music Ministries and Organist/ Choirmaster at First Presbyterian Church in Arkadelphia.

Dr. Kreckmann completed his DMA in Choral Conducting at Texas Tech University with Richard Bjella in 2013. He also taught several courses and choirs at Texas Tech and served as Director of Music Ministries to St. John's United Methodist Church in Lubbock, Texas. Dr. Kreckmann's earlier studies include a Master's degree in Choral Conducting from Michigan State University (with David Rayl, Jonathan Reed, and Sandra Snow) as well as a Bachelor of Music in Music Education from the University of Delaware (with Paul Head).

Prior to attending graduate school, Dr. Kreckmann served as Director of Choirs to over 250 students and five choirs at Morris Knolls High School in Rockaway, NJ. During this time, he also served as president or member to several county, regional and all-state boards in New Jersey. He was also named Teacher of the Year in his final year at Morris Knolls.

Throughout his career, Dr. Kreckmann has also served as an accompanist, guest conductor, and clinician to numerous honor choirs throughout New Jersey, Delaware, Michigan, Texas, South Carolina, Alabama, and Arkansas. His choirs have toured across the US and Europe. He has also had the privilege of serving as chorus master to several major opera productions. Most recently, he served a third summer on the conducting faculty of the Delaware Choral Academy’s choral symposium in Aix-en-Provence, France.